Founded in 2005, The Livery has been serving up award winning “hand-forged” craft beer for 15 years! The family (and pet) friendly brewpub is housed in a restored 120-year-old brick building in the Arts District of Benton Harbor, MI. Built on an intimate sense of community, the brewery carries out a tradition steeped in history and good cheer. The trifecta of craft beer, locally sourced food offerings, and live music has become a unifying staple for visiting travelers, and the local community! 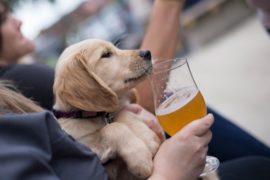 The Livery received early acclaim for their barrel-aged beer program, which was not so common at the time. “Bourbon Barrel Aged Trippel Weizenbock” immediately made a mark on the craft beer community, becoming one of the “Top 100 Beers in the World” and remains #1 for it’s style to this day, per Ratebeer.com. Moreover, the vast tap list expands to offer a plethora of lagers, ales, stouts, sours, cider, and wine!

In the years since opening, The Livery has expanded, improved, and refined their craft across the board. Since taking ownership in 2016, Simon Rusk has also doubled as Head Brewer, making these past 5 years a true labor of love. During this period, The Livery brew team has expanded the brewhouse space, upgraded production equipment, and created a vast catalog of hand-forged beers with a focus on quality, consistency, and excellence across all styles.  The Brew team is also committed to using locally grown ingredients including fruit, hops and honey, and is proud to showcase the region’s world class terroir in its everyday offerings and specialty beers.  This creativity comes in conjunction with retaining some of the fan favorite brews, albeit with recipe changes and updates. In order to showcase these creations, The Livery focuses on three beer release parties each year: 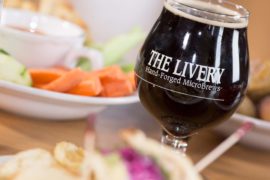 Under the wing of Brewpub Manager Kelly Vega, The Livery has seen several transformations. From streamlining operations, to managing the longest tenured staff, and having worked all those positions herself over 15 years of service here, Kelly has been able to constantly elevate the experience. In addition to keeping The Livery machine well-oiled, her

community outreach is intangible. Partnerships that have been forged with philanthropic organizations through the weekly “Community Night”, and quarterly Benton Harbor Arts Association events, which only further deepen the brewpub’s ties to the improvement of the region. Kelly has been there since the very beginning, as has overseen an Art Hop partnership, spearheaded the aforementioned “Community Night” which has donated $40,000, and earned The Livery the “2020 National Toasty Award” as the leading Community Advocate!

In The Livery kitchen, Becky Wehmer has been at the helm since 2016. Using her Art Degree and extensive glass blowing experience as a creative launchpad, Becky has taken the food menu to new heights! The spent-grain, hand-tossed pizzas have become known throughout the area for their fresh ingredients, sourced locally from Michigan farmers! Whether you select one of the brewpub favorites, “Build Your Own”, or try one of the seasonal specialty pizzas, the unique flavor combinations are always on point! Visitors and foodies can also enjoy spent-grain pretzel bites, fresh salads, hot sammies, and hummus on the menu. And yes, there are gluten-free options as well! Additionally, the sustainable businesses practices implemented are always at the forefront of the process, in which Becky has been a leading voice, and a large part of The Livery accepting Michigan’s Great Southwest Sustainability Leadership Award for Small Organizations! 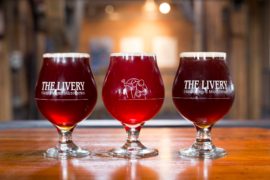 Rounding out the The Livery trifecta is Brandon DeJaynes, Booking & Promotions Manager. Brandon has been at the brewery for 6 years, filling the events calendar with concerts,

fundraisers, and private events, in addition to being the online voice through social media! Before joining the team, he spent several years in live music production working site operations, and managing shuttle programs for the largest festivals in the country including: Coachella, Bonnaroo, The Hangout, and Lollapalooza. Using his optics for large scale events, The Livery has seen growth in both crowd size, and in the scope of production. The focus of the concert calendar is on original material, with a “Michigan-centric” flavor.

Staying on the pulse of the vast live music community is no easy feat, but The Livery is always up to the challenge of providing the best of what’s around! The many private events that brewpub hosts, and executes, is a further testament to the warm and inclusive atmosphere. As we push through this current pandemic, look for The Livery to provide safe, and creative avenues for artists and guests alike!

While The Livery has suspended their concert and events calendar until further notice, the brewpub is open for beer and food sales. Customers can choose between an outdoor dine-in experience in the extended, and heated, beer garden, limited indoor seating, or ordering online for curbside pick up to-go! For more information, please visit www.liverybrew.com.

If you’d like more information about The Livery or you have a question, let us know:

Source: Moody on the Market
Full story at: https://www.moodyonthemarket.com/the-livery-15-years-of-hand-forged-tradition/