The fate of the renowned Heritage Museum & Cultural Center in St. Joseph is in the middle of a furloughed fog, and what happens next is of major concern to fans and patrons of the center who are left scratching their heads wondering when or if the center will re-open. 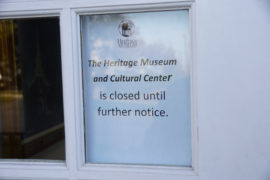 According to sources close to the center, the entire staff was furloughed last month, then briefly brought back before being laid off en masse today with no advance notice. A paper sign in one of the glass panes of the entry door states simply: “The Heritage Museum and Cultural Center is closed until further notice.”

The organization has been facing struggles related to the coronavirus pandemic, but it goes beyond that. One report says that they nearly went bankrupt just about a year ago, after struggling with finances for some time.

A financial shot in the arm arrived in December which kept the center going into the early part of the year when a much brighter future was developing. In fact, it looked to be a banner year with a nice increase in bookings for the event center, new exhibits being planned, and a major fundraiser was slated for May. Then along came COVID.

As with many entertainment and event venues all across the landscape, event rental revenue plunged to zero, and the major event, their Heritage on the Green event was cancelled. For an organization that is dependent upon as much as a third of its annual revenue expected to flow from the event center, that’s a devastating blow. But the center has traditionally garnered the other two-thirds about equally from grants acquired from state, federal and private sources, and then from individual and corporate donors.

Unfortunately, indications are that despite budget cuts and reined in spending, the organization couldn’t counter a fundraising committee formed in February that failed to raise a single dime.

Staff members successfully wrote several grants and secured some COVID relief money in the form of Payroll Protection Plan loans and the like, but board members responsible for the fundraising left a considerable, and perhaps insurmountable, gap.

Even in the face of the coronavirus storm, two new exhibits were established, including the popular new “Keepers of the Fire: The Pokagon Band of Potawatomi” which opened at the museum in August.

It appears that new board leadership in July was a turning point, as one very involved member left shortly thereafter, either forced aside or departed of their own volition, and with resources running thinner with every passing month the end apparently arrived today with the staff laid off, the lights turned out, and the doors locked.

The organization’s website is still intact, but has a front page announcement that reads simply:

“The Heritage Museum and Cultural Center is an important and supportive organization in our community. During these uncertain times, the HMCC Board of Directors takes this time to reorganize and restructure to better serve our organization and community.

Please check back here and on our Facebook Page for regular museum and event updates.”

The center has partnerships with the City of St. Joseph and accepts public money, which could make them subject to public meeting laws, but the board has reportedly moved to closed, private sessions in recent months leaving further information up in the air at the moment.

I’ve reached out to Board Chair Laurie Marshall, and am awaiting a callback for additional insight.

Laurie Marshall responded to my inquiry on today’s shutdown. Here is her response:

“The Heritage is temporarily closed for restructuring. All artifacts are secured. Thank you for asking.”

Source: Moody on the Market
Full story at: https://www.moodyonthemarket.com/sjs-heritage-museum-cultural-center-closed-fate-uncertain/