If all goes as planned, visitors to Whirlpool Centennial Park below the bluff will have a little bit of extra shade while stopping by the Compass Rose Fountain, and perhaps more importantly, access to a new year-round restroom facility in that park with a “live” or green roof and a shady overhang among other new amenities. 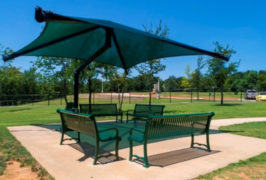 Greg Grothous, Deputy Director Parks and Grounds for the City of St. Joseph, presented updated information and plans for the improvements proposed for the park overlooking Lake Michigan across the street from Silver Beach County Park, and asking for the City Commission’s approval of an application to the Michigan Land and Water Conservation Fund to help make the upgrades a reality.

Grothous says that at the January 25th meeting of the St. Joseph City Commission the Commission provided staff with their guidance to move forward with the preparation of the grant application, after which the Parks and Recreation Advisory Board held a Public Hearing on Thursday, March 11th, to receive public input on the application. The input received from the Public Hearing and the Parks and Recreation Advisory Board was then incorporated into the plan, resulting in an increase for the total project of $690,000…some $50,000 higher than the original plan.

The proposed project would include:

The total estimated cost for the proposed project is $690,000, with the application being made to the Land and Water Conservation Fund grant program. That program requires a 50-percent match which would amount to $345,000, therefore the city’s grant request from the LWCF will be for the balance of $345,000. Grothous says that a generous anonymous donor has donated $100,000 to the St. Joseph Parks Foundation to assist with the project, and he anticipates an additional $5,000 gift from the St. Joseph Lions Club, and also invites other such clubs to take part if they wish.

Grothous told the commission, “If this grant were awarded, which of course is not certain, we believe the work would likely take place in the 2022-23 fiscal year, although it will be budgeted in the 2021-22 budget year in case the project is approved and the state approval process moves more quickly than we anticipate.” He adds, “We believe the most likely case, if approved, is that construction documents would be prepared in the fall of 2022, the  project would be bid over the winter, and construction would take place in the spring of 2023.”

Several City Commissioners queried Grothous about ongoing maintenance costs to keep the restrooms clean and well-stocked, but he said he does not have a firm number at this time, but did not anticipate it being terribly out of line with similar costs elsewhere in the city, despite his projection that “It will likely become the busiest such restroom facility under the department’s watch,” due to the location and the fact that it will be built to be used year-round unlike other facilities that are seasonal in nature.

Mayor Mike Garey reported that with radiant heat in the floors of the restroom and the green, living roof planned for it, HVAC costs would likely be far more consistent and efficient.

The Commission approved the application process and Grothous says it will likely be late November or early December before a decision is announced at the state level.

Source: Moody on the Market
Full story at: https://www.moodyonthemarket.com/sj-commission-approves-grant-application-for-restrooms-shade-amenities-at-whirlpool-centennial-park/