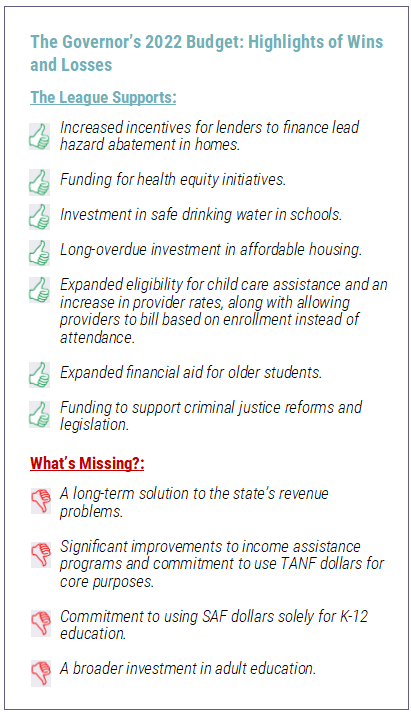 Following an unusual budget cycle, with the COVID-19 pandemic interrupting typical budget deliberations and the need for a rare third revenue estimating conference before the 2021 budget was completed, Gov. Gretchen Whitmer has presented her 2022 budget recommendation. While much of the 2021 budget was focused on the response to the COVID-19 public health crisis, the governor’s 2022 budget takes a look at the recovery ahead by prioritizing funding in the following areas: public education, economic opportunity, public health, infrastructure, clean energy and the environment, and equity.

The governor’s budget, which was presented to the Legislature on Feb. 11, 2021, contains the details of her plan to allocate the state’s resources for the 2022 budget year, which begins on Oct. 1, 2021, and ends on Sept. 30, 2022. Fears of significant cuts were alleviated by stronger than predicted revenues, due largely to federal funds in the form of increased unemployment benefits, direct stimulus payments, and state and local government relief.

However, despite these upward adjustments in revenues—much of which are considered one-time revenue increases—a structural deficit going forward and other risks exist on the horizon. Additionally, missing from the governor’s budget is a long-term solution to the state’s revenue problems. These upcoming risks dictate the need for smart and strategic investments to ensure future cuts do not occur.

Legislative committees are now meeting to craft their own versions of the 2022 budget. The decisions they make can either help create equity for all Michiganders regardless of race, ethnicity, income or zip code, or could perpetuate the long-term barriers faced by many Michigan families and working people that arose from a history of state budgets and policies that haven’t adequately addressed the cumulative impact of inequity.

The League is advocating for a set of budget priorities that can improve Michigan’s economy by creating equity for the state’s children and families. 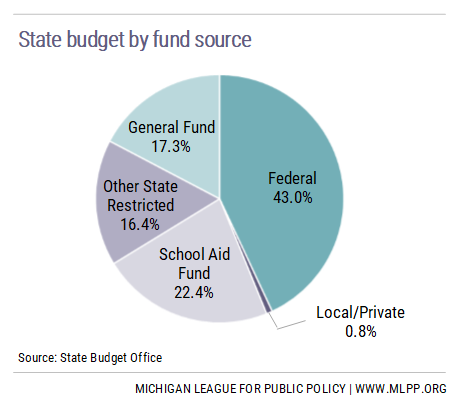 For 2022, the governor recommends $67.1 billion in total spending from state and federal revenues. Spending from the state’s General Fund—the portion of the budget over which lawmakers have the most control—is expected to be $11.4 billion. General Fund revenues have been fairly flat over the last two decades and fall far below the need if increased inflationary costs are considered. In fact, when adjusted for inflation, the state’s General Fund revenues fall below levels in the 1968 budget year, the year the state income tax was first levied. 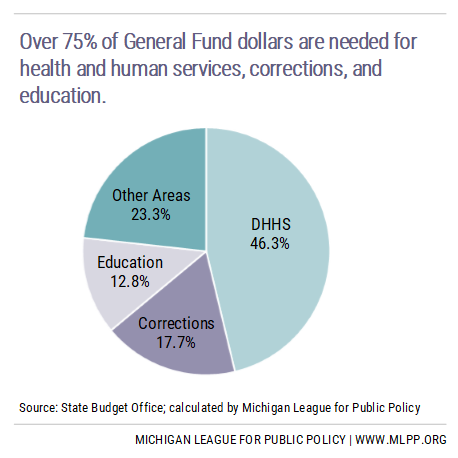 Michigan’s General Fund has been losing ground because of state tax and budget decisions that have reduced revenues or earmarked funds. In addition to deep cuts in business taxes in 2011, lawmakers have diverted almost $2 billion of the state’s General Fund for other purposes, including $600 million for roads, an anticipated $575 million for business tax credits, and $521 million to reimburse local governments for their losses resulting from personal property taxes no longer levied on businesses. These diversions come at a significant cost to budget priorities, as ultimately more General Fund dollars are needed for federal match requirements and to fund health and human services, higher education, and public safety. 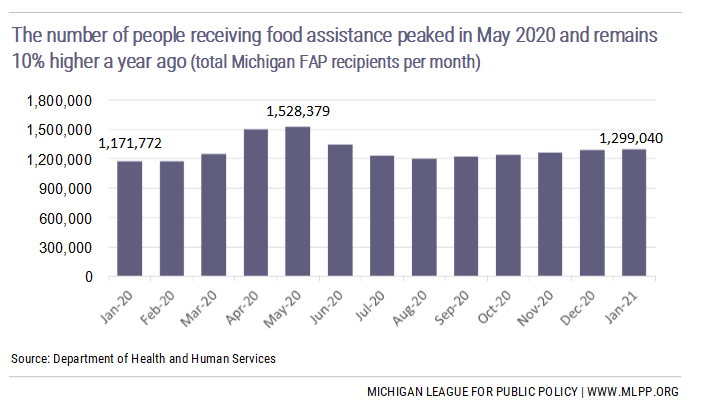 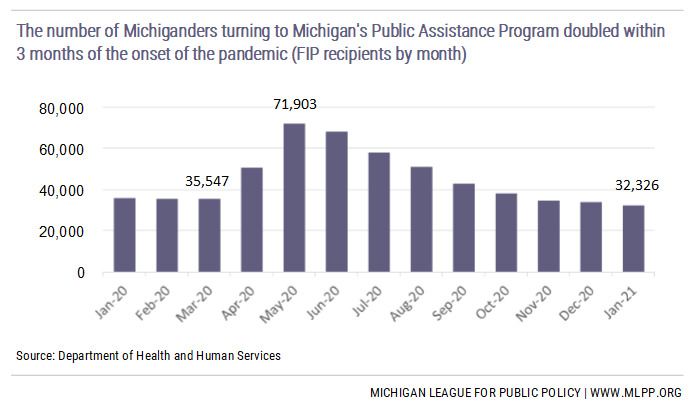 Efforts to preserve and strengthen families are critical in overcoming the persistent overrepresentation of children of color in the child welfare system—from the identification of neglect, to the removal of children from their parents, homes and communities. In 2018, 18% of children and youths ages 0-17 in Michigan were black or African American, but they represented 29% of the children in foster care, 35% of the children with more than two placements in care, and 30% of the children whose parents’ rights were terminated so they were waiting for adoption.

The governor recommends additional funding in the current budget year (2021) to address student learning loss and help schools reopen safely. The governor’s goal is to ensure that students have an in-person learning option by March of 2021, and she is focused on student recovery programs as well as out–of-school time opportunities that can help students with learning losses related to the quick and unavoidable shift to online learning early in 2020. Included in her supplemental budget request are:

When the COVID-19 pandemic struck and schools closed in March, concerns were raised about the impact on third-grade reading, as well as implementation of the state’s Read by Grade Three law that permits the retention of children who are reading below grade level. The Return to Learn law that was approved in August 2020 requires school districts to use benchmark assessments in the 2020-2021 school year to identify children who are having difficulties with reading. Funding for early literacy services is kept at current-year levels in the governor’s 2022 budget, including:

Use of K-12 Funds for Postsecondary Education

In addition to funding in the Human Services portion of the budget to fund the enacted Raise the Age initiative to keep 17 year olds out of adult courts, the governor’s budget includes funding to implement and further support criminal justice reforms and legislation: